The Orphan of Zur

You visited this world in, "The Giant Alien Women of Planet Zur." Now come back to it again in "An Orphan of Zur." A completely independent story set on the same planet. This story follows the same rules but has different characters and a completely separate story line.


Azzling was the pet of Legant, a gorgeous, buxom, 9 foot tall, blue, alien woman with a long tail that is more like a prehensile penis.

These alien women have a genetic condition that amplifies all their sexual characteristics as well as their libidos. Sadly, it also makes them unattractive to the men of their own race, but, what's unattractive to one species can be irresistibly beautiful to another.

Unbelievably large eyes, soft sensuous lips, big breasts, long shapely legs and a curvaceous figure, that a pin up model would be jealous of, are all things a male from the planet of Zur finds unattractive.

Filled with an insatiable sexual need that can't be satisfied any other way the Zurite women abduct Earthmen who lust after women with their type of features. Then they genetically manipulate the Earthmen to meet their sexual and aesthetic needs.

The bodies of these Earth men are changed and transformed, They are turned into submissive sex toys that fulfill their every alien desire. They are transformed to look female, except for their modified and enlarged genitals, which can satisfy a Zurite women. They are even modified, in a special way, that only a being with a penis like tail can appreciate.

While assertive and demanding dominants the Alien women keep the Earthmen as beloved pets. Pets that serve their every sexual need and desire. It's a kind, loving form of female domination.

The alien women also have a hypnotic power that makes the Earthmen unable to deny them any command. Would you deny a beautiful giant woman who wants to use you for sex and make your every submissive dream come true?

Azzling's owner, Legaunt, has passed away. And, although, she left everything to her beloved pet, Azzling must now find a way to rebuild his life on a planet that doesn't always welcome him. You see, life can be tough for a newly transformed submissive she-male. Thankfully there's the Xury and her human pet Cility to help little Azzling figure it all out.

Just when things seem to be going his way Azzling gets thrown a curve ball in a cliff hanger ending that will leave you begging for more.

Be sure to read the FREE sample chapter. It will give you the best idea of what the story is like.

How to put my files on your device.

All files viewable on a desktop computer with FREE ebook program Calibre.
Complete instructions on how to load the file on your device of choice here.

Buy From Other Stores

Prices, covers and content may vary. See FAQ for explanations.
Bonus chapter NOT avaialable from any of these retailers.
The bonus chapters are only available if you buy directly from me. 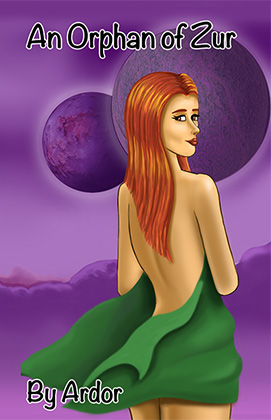