A Matter of Seconds
When Steven took out that ad in the swinger's magazine looking for a dominant woman he had no idea who would respond. He ended the ad with his initials and a P.O. Box number but once it hit the stands a mysterious woman started calling him. How did she get his number? How did she know who he was? More importantly how is it that she was the perfect dominant woman he'd always dreamed of?

They have passionate phone sex. She dominates him by phone in every way possible and he loves every minute of it. Something is about to change though. This time when she calls he finds out she's on the other side of his apartment door. In a matter of seconds his entire life will change. He'll find out exactly who this mystery woman is and how she knows him so well. She'll make him ache for her in a way he's never wanted another woman and he'll serve her in every way she desires loving every second of it. 5,985 words of heart pounding, torturous pleasure.


After a quick tour around the club he's led into a private room where they strip, bound, blindfold and make him ready for Eve. In the mean time he's found out that Eve used to be a regular at this club. In fact she's a well known female dominant at the club who disappeared eight months ago. That's only two months before he met her. Jerry learns things about the woman he thought he knew that would change their lives forever. Will Jerry be able to handle it when all his kinky dreams come true? 8,528 words of kinky fun.

The Woodsman
He liked taking naked pictures of himself outdoors in hidden places he wasn't supposed to be in. He was in for more than he bargained when he found the patch of woods he planed to use for his next photo shoot. Little did he know that this patch of woods was on private property. Private property that was patrolled by a woman who knew what she wanted. 3,070 words.

The Doctor is in
Dave has introduced his sexy girlfriend Debbie to kinky sex. They take turns playing sex games but this time Debbie has something to teach him! With the help of her kinky friend Susan they decide to give Dave the medical fantasy of his dreams. 8,973 words of fantasies come true.

The Mysterious Madam Zelda
This is the exact same story your is sold separately here but it's included with book for free as a thank you for buying directly from me.

The Mysterious Madam Zelda is a world famous hypnotist. With just one look into her mesmerizing eyes she can take control of you body and soul. One night Madam Zelda is performing and she's heckled by a rude man in the audience. Madam Zelda brings him up on stage and teaches him a lesson in humiliation that he'll never forget. Madam Zelda recognizes something very special inside him and, more importantly, the woman he came with. A firm believer in female lead relationships Madam Zelda decides to set this couple on a very different path in life.

Read the free sample chapter to get a hint of what this couple has in store for them. Once you have, you too will be taken in, and brought to your knees before the powers of, The Mysterious Madam Zelda. Once at her feet you will never, ever, want to leave.

Be sure to read the FREE sample chapter. It will give you the best idea of what the story is like.

How to put my files on your device.

All files viewable on a desktop computer with FREE ebook program Calibre.
Complete instructions on how to load the file on your device of choice here.

Buy From Other Stores

Prices, covers and content may vary. See FAQ for explanations.
Bonus chapter NOT avaialable from any of these retailers.
The bonus chapters are only available if you buy directly from me. 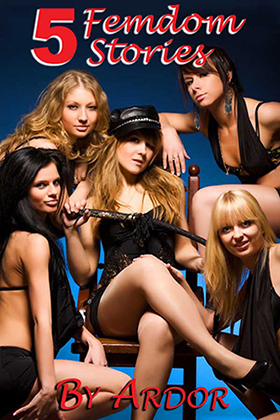